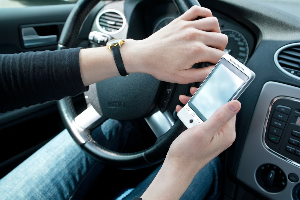 Most of us are constantly attached to our cell phones—we text, call, look questions up, and use social media throughout the day. However, when you’re driving, using your cell phone can get you pulled over by law enforcement and fined—or, if you’re distracted by your phone, you could cause a serious car accident.

Below, learn what makes texting and driving dangerous and familiarize yourself with Nevada’s distracted driving laws. When you follow our tips below, you can stay safe and obey the law when you’re on the road.

Everyone has heard of the dangers of driving while drunk. With alcohol in your bloodstream, your vision, reaction time, and inhibitions are all impaired, making you a danger to yourself and others while driving a moving vehicle. However, using a cell phone has the potential to be just as dangerous.

When your eyes and mind are on your phone screen instead of on driving, the distraction can impair you as much as if you’re legally drunk. Even if you’re just talking on the phone while driving, you are four times more likely to crash.

In 2012, about 3,500 people died nationally from crashes involving a distracted driver, and about half a million were injured. Law enforcement believes these statistics are too conservative—experts say the real number is probably higher.

Because the dangers of distracted driving are real and because cell phone use is so prevalent, Nevada passed laws in 2011 to limit cell phone use while driving.

As of January 1, 2012, it’s illegal to use your cell phone while driving in Nevada. You cannot talk, text, or access the internet while behind the wheel of a moving vehicles.

However, that doesn’t mean that cell phone usage is completely banned. Nevada allows you to talk on your phone if you use a hands-free headset. You can touch your phone to begin or end the call—just don’t hold your phone while you’re talking.

Nevada did include some common sense exceptions to the no-hands rule, including situations where you are:

Law enforcement, emergency medical professionals, firefighters, and utility workers also have exceptions for their jobs written into the law.

Generally, you can follow the law by not using your phone while driving. If you must use your phone, make sure you have a hands-free headset to talk or that you can use a voice-activated system. Keep your hands and eyes free for driving.

If you’re caught using your cell phone while driving, you’ll have to pay a fine. If this is your first offense within the last seven years, you only have to pay $50. Your offense will not be treated as a moving violation, meaning that you won’t get any demerit points applied to your license and your insurance probably won’t be affected.

However, if you break the law again, your fines will increase, and your infractions will be treated as moving violations. Keep yourself and your wallet safe by following the law. If you’re tempted to use your cell phone while driving, either pull over to use it, put your phone in the glovebox so you can’t reach it, or download an app that blocks texts and calls while you’re driving.

If you were fined for cell phone use while driving, but you believe that you didn’t break the law, contact 702 Traffic. Our experienced attorneys are experts in Nevada traffic law, and we’ll do our best to make sure that you’re treated fairly in traffic court. Contact us today to get legal help after you’re accused of distracted driving.

The information contained in 702Traffic.com is provided for informational purposes only, and should not be construed as legal advice on any subject matter, until a client relationship is contractually made for our services.